How I Got Into MIT Research Science Institute

As you guys know, I had the wonderful opportunity to go to the Research Science Institute (RSI) program hosted by MIT this summer! As the most prestigious summer program in the world, a lot of people have asked me about how I got into RSI. So naturally, the next step is to continue capitalizing on being a Rickoid… Just kidding. I wanted to write a blog post saying “how I got into RSI” with everything that I did to get in, but in reality, I really don’t know how I got in, and I don’t want to claim to know or give any advice on that. However, because I know the importance of having someone there for you for advice and feedback during application season, here are some things I learned about applying to RSI, and I would recommend you check out my blog post on my summer program application process here as well!

First of all, I don’t know how I got in. I know, you’re probably thinking, “yes, everyone says that to be humble,” but I genuinely don’t. I had absolutely no huge accomplishments at that time, because all of my major accomplishments came after I applied to RSI. My biggest accomplishment at that time was winning First Place at the state science fair, and I guess, also my blog. Because of this, I definitely don’t think it was my accomplishments that got me in.

However, my speculation is that there are three types of people who get into RSI. And please note, of course, that I have absolutely no authority or insight on any of this, so take this with a grain of salt.

Who gets into RSI?

The first type are people who are superstars in what they do. International Olympiad winners, ISEF top award winners, brilliant published scientists, people like that. These people are hands-down the most accomplished people in our grade, and it’s pretty self-explanatory why they would get in. After all, they’re one of the most accomplished people our age. If you’re worried about “I’m ranked second but what if the guy that’s ranked first gets in but not me,” it really doesn’t make that big of a difference. You’re good enough, just focus on your essays at that point.

The second type are people who have made the most of their resources. I think this was how I got in. I go to an average public school with no other students doing research, but I found professors through cold-emailing, and started some small independent projects that demonstrated my initiative. For these students that weren’t already famous, you could tell that they worked super hard to get where they are, and would really benefit from the opportunity to go to RSI. There are a lot of applicants like this, so this is where subjective measurements like your letters of recommendations and essays really matter to show your genuine passion for science and how you’ve made the most of your resources. To me, I know I definitely did every single thing I could to get my hands on any opportunity I could, and leveraged everything I could to do more.

There’s a third type, but it’s not within anyone’s control, so I won’t say what it is.

How do you write the essays for RSI?

My essays for RSI were some of the worst essays I had ever written. When I tell you I had no expectations to get into RSI, I mean it. I had no accomplishments, my essays were terrible, and the only reason why I applied was because I thought “YOLO!” and just submitted it as a nice generous donation to CEE (I wondered if my application fee was tax-deductible because I had no shot). Yet, even though my essays were cringey and riddled with grammar mistakes, these were some of the first essays I had ever written for an application, so they were very genuine. As embarrassing as they were, I ranted for 6,000 characters about how cool I thought plasmids and antibiotic resistance were, and even though the essays were very unpolished, I could really feel my enthusiasm in my essays. I think these types of essays have worked out the best for me, the ones where I was raw but genuine. As I’m reading and giving feedback on college essays for my friends for college applications now, I’ve realized that the perfection of the writing matters a lot less than you might expect. Rather, it’s the story, and the person that you see from reading the essays. If you can feel the excitement from the essay, it doesn’t need to be a Pulitzer-prize winning essay to be good.

I also made sure to point out that I made the most of my resources in my essays. I talked a lot about my dreams for my next steps in research, and how much RSI would be able to change my trajectory if I was able to go. I discuss more about showing these programs how much you would benefit from the program in my blog post here.

What do you mean about RSI and accomplishments?

When I first applied to RSI, I barely had any notable accomplishments. Yet, you might have seen on my blog about going to ISEF and my documentary, and everything along those lines. So, I want to acknowledge one of the biggest impacts that getting into RSI had on me, something that people could say was a positive or a negative. When I was accepted, I couldn’t stop thinking that I was accepted as a mistake, or because they needed a random average kid in there. Because of this, it really drove me to pursue a ton more opportunities, so in my eyes, I could redeem myself and show that I was deserving of a spot there. Going to RSI ended up changing my trajectory, in a way that may have been indirect, because I really wanted to prove mostly to myself that I wasn’t just a mistake and I was good enough to be chosen as one of the top 50 students in the country. Even as scary as this was, I think to me, it was a good thing that it happened, because it completely shifted my perspective of who I had to live up to, and pushed me towards accomplishing a lot more than I ever thought was possible. That’s really how I got a lot of my top accomplishments.

How do you choose your fields and sub-fields?

To be honest, I still don’t know. I put Microbiology under Biology, and Biochemistry under Chemistry for my application. They choose your mentors based on your fields, sub-fields, and essays though, so make sure to choose something that you would be interested in, not just something that you think would sound impressive.

How long did you spend on your RSI application?

My very unhelpful answer is, I don’t know. It was about as long as I spent on any other application, which I would say is about a couple weeks. I do remember my jaw dropping to the floor when I saw how much I had to fill out though, so make sure to start early!

Was it stressful waiting for decisions?

No, honestly, I forgot I had even applied. But when I got the email in my inbox saying I had gotten in, my first reaction was, “is this a scam email?” And then it finally hit me.

Does RSI matter for top colleges?

You definitely don’t have to go to RSI to get into college! However, what people are referring to is that RSI students have a shockingly high acceptance rate at top colleges, which they post on their website here. I got to know a lot of students at top colleges through RSI, which was a good way to get to know what the environment in college is like!

What were your stats and extracurriculars?

Unfortunately, I won’t post that since I don’t think it would be very helpful anyways. There’s no way to directly compare yourself with anyone who gets in, and unlike everyone who says that you have no shot if you aren’t exactly like Terrance Tao as a teenager, it’s really dependent on how you compare to the people around you. That’s not to say you should go around your school begging everyone for their stats and extracurriculars, but doing really well in your own context is a big factor!

Good luck everyone! I’m rooting for you, and comment below if you have any questions about the application process. 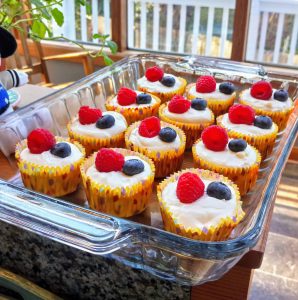